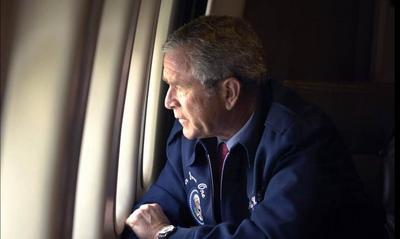 Bush looks out the window of Airforce 1 at New Orleans 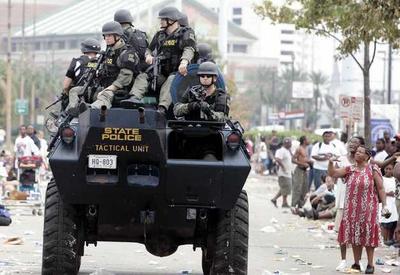 [This blog entry was posted on September 2 as an initial reaction to the disaster in New Orleans. It evolved into a bit of a stream of consciousness over several days, spread over a number of posts. I have consolidated them into one post because I think other people's interest may be limted.]

Just a little sidelight on the barbarism in New Orleans following Hurricane Katrina. This is of course playing all over the Asian media, often and perhaps inevitably in very unflattering ways. It doesn't do a lot for America's international image. The country is being made to look like some kind of tin pot, banana republic, with a seething mass of desperate citizens and without the leadership or the resources to organise a prompt relief and public order operation. One pretty reasonable Chinese blogger who writes in English, Binfeng Teahouse, tried to deliver an antidote but in the process said a lot about the nature of the reception of this news in his country. I hate to think how the stark racial aspect some of these images of the Deep South in crisis plays in this part of the world. People don't necessarily understand the situation in the South.

On the Bush front: what is he going to do this time to distract attention from his administration's tardiness , poor decision making and poor leadership despite plenty of warnings? Invade Iran? Or Massachusetts? Is it just me? Am I missing something about the basic standards citizens demand from their leaders or are we going to have a very dangerous lame duck floating in the post Katrina flood waters?

There is a chap blogging from inside New Orleans. He is part of a team who have remained in the city to keep an internet hosting service up and running. This account of a mobile phone conversation with someone at the Convention Centre caught my eye. 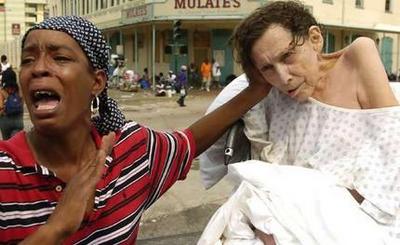 Some ill informed thoughts as I retreat red-eyed from a night watching the coverage of this on CNN: I am sure there will be much talk over the next few days of everyone pulling together in the States and getting through this catastrophe together. I heard one of the Louisiana senators talking about how her house had been destroyed. Looking at the images on CNN, though, and at the reasons why these desperate people were still in the city raises a question about whether this is really a "national" disaster or whether it is better described as a disaster for the poor and the weak. I know all disasters tend to hit the weakest hardest, but the US authorities' laissez faire attitude to disaster relief seem to have made this one more starkly class divided.

PS: Maybe this is not the right time for humour but this made me laugh (maybe it wasn't the right time for political points either). If you don't like swearing, don't click the link. It is a tongue-in-cheek take on the Yahoo! "looting versus finding" controversy, which you probably know about. He explains it anyway. (Via no-sword)

PS: At least there is a bright side to all this. The American Family Association rejoices with Rev. Bill Shanks, pastor of New Covenant Fellowship of New Orleans: "New Orleans now is abortion free." Hooray!

PS: One of the responses to the criticism of the administration's incompetence will be that it is political point scoring from lefties. Dadahead reports that criticism is not limited to the left.

PS: "While some fight the insurgency in the city, other carry on with rescue and evacuation operations" - Where are we? In Louisiana, according to the Army Times.

Fox News is a right-wing television news channel in the US. It is often accused of aggressively spinning stories to favour a conservative perspective. Two of its reporters lost it with the news anchor on Friday. It is compelling television and revealing about the reality of the situation in New Orleans:

"Look in the face of the baby. This is it. No sugar coating. No political spin. No Republicans or Democrats. People suffering. Let them go. Let them out of here."

"Look in the face of the baby. This is it. No sugar coating. No political spin. No Republicans or Democrats. People suffering. Let them go. Let them out of here." (Version 2. Not as good quality but a different format in case the other one doesn't work.)

PS: This is a bit more difficult to get to play (I had to use Internet Explorer) but it is worth it. Kanye West, a US celeb, goes seriously off script when doing one of those stock "Please give generously" broadcasts with comedian Mike Myers. To be honest, I don't know who this West gentleman is but feelings have obviously been seriously stirred up by this.

PS: Of course, everything I am writing here about Katrina is second hand. I am simply relying on other bloggers accounts in the US on this topic. I've become rather obsessed over the past couple of days with what seems like the extraordinary inability of the world's dominant power to organise a piss up in a brewery. I've been surfing loads of blogs about this. Some are way faster than Brian Leiter (I like Dadahead for its unashamed leftiness) but, as usual, Leiter's coverage is crisper than a fresh linen sheet.

PS: At last, six days late but he has got it.

PS: And a detailed Washington Post article on what went wrong in the Bush administration in the lead up to Katrina.

PS: Meanwhile, Barbara Bush shows that empathy for other people's suffering runs in the family.

Its always been about government...

Everyone is so pissed off about this--and yet they fail to realize that we are the one's responsible...

We voted for these nuckleheads left and right alike...

We sat by while they did incompetent things and then voted them into office again... right and left alike.

Just watch... we are going to sit by while some morons in Congress spend millions of dollars on an investigation that will not do one damn thing.

Indeed, the only thing that will be guaranteed to happen is that no one person will be blamed for anything.


WOULD YOU PAY ONE DOLLAR FOR THAT???

If you are willing to sit by and let that happen--as most of you will (after all your side was right... right?) Then you can rest easy knowing that you have the Government that you deserve. A bunch of blowhards who cannot lead two mutes in silent prayer.

This was a huge screw up by all parties involved--I bet they all get reelected (well, except for Bush).

I left this anonymous because I don't need trash in my inbox. Post to the blog if you have something to say and I'll read it.