Ando Hiroshige (1797–1858) was one of the great ukiyo-e artists. The peak of his success came in 1833 with the print series "The Fifty-three Stations of the Tokaido" , the famous highway connecting Tokyo and Kyoto.

Hiroshige had some of the dash and daring of the old master Hokusai, whose work is reputed to have attracted him into print making in the first place. However, whereas Hokusai's work sometimes had a bit of the hard edge of modern art about it (it later became a major inspiration for some modern artists), Hiroshige revelled in the intimacy and approachability of his work. Other famous series followed the Tokaido prints, such as the "100 views of Edo [Tokyo]" and "Sixty-nine Stations on the Kiso Highway".

One of the famous Tokaido series was a view of Hiratsuka, a thriving staging post on the Tokaido road in Hiroshige's day. This is the image he produced. 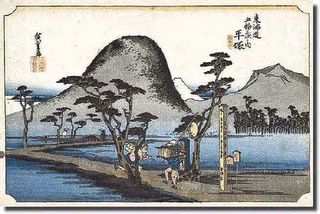 And this is a photo taken from about the same spot now. It seems Hiroshige took some liberties with the landscape. The mountain to the right of Hiroshige's print is not there anymore. They might have knocked it down (!!!) or it might be Oyama, which is way off to the right and cannot be seen at all from this spot these days because of a load of advertising hoardings. It is also possible that Hiroshige inverted the image, with the lower mountain on the left of the picture moved to the right for compositional purposes. 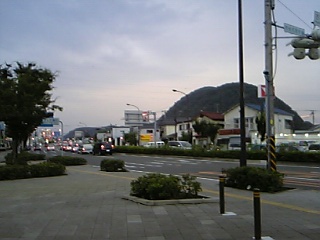 It is tempting is to see the contrast between these two images as evidence of the massive changes in Japanese society: a clash between a quiet rural past and a brash commercial present. On the other hand, the Tokaido road was always about bustling trade and its staging posts were renowned dens of iniquity and haunts of seekers after the fast Buck. Ukiyo-e itself was a mass market product sold to a faddish metropolitan market and Hiroshige was one of the most accomplished players of that market. Come to think of it, the traffic you see on the modern road is probably a lot more local than much of the traffic on the old Tokaido route.
Posted by Nonjatta at 10:28 pm

That reminds me, I had a Hiroshige print on my wall when I was living in Takayama. God knows where I got it, prob'ly a free gift from the Tom and Jerry Bank. Most of my Japanese acquisitions are stored away in a basement somewheres. I should dig them out and see what strange treasures I've forgotten about.

All I kept from my first Japanese experience was a huge ugly wooden Daruma that weighs a tonne. It is in the UK at the moment because it would take up the entire luggage allowance on its own.

I love my ugly wooden daruma! My wife made me take it off the shelf, though, 'cause it scares the baby.

Bet it is not as ugly as mine. Mine isn't one of those proper Itto-bori things, it is a hunk of pine or something chopped by some bored hick into something resembling a Daruma

It certainly is ugly. I am glad that it is not here, but the scary thing is that you start missing it after while!